The Bloodhound comes in 3 colors: Black and Tan, Liver and Tan (Red and Tan) and Red (Tawny). A small amount of white is allowed on the chest, feet and the tip of the tail. While there are variations of these colors, they still fall into one of these color patterns. A predominantly black where the black "saddle" covers most of the body except for some red on the legs and face is often referred to as a "black" but is still considered a Black and Tan. This can go the other way also, where the saddle on the black and tan or liver

The Liver and Tan 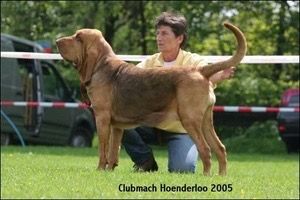 The Black and Tans

For saddle patterns breeders use the terms B1 -B4 to grade the amount of saddle, this grading system is used on both liver and tan and black and tans dogs. Not L1-L4 All of these saddle patterns are equally exeptable although a B4 or full coat is a recessive gene and is usually rare to see. Although some colors can be rare there should not be a difference in price for liver and tan vs Black and tan, this is usually a ploy from backyard breeders. when you see kennels that have majority full coat livers or full coat black understand that these are recessives......many backyard breeders have some of the most beautiful colored hounds.....but this may be the only aspect they are breeding for......there is no preferrance given in the ring for amount of saddle.

Notes about color
Most Black and Tan puppies are born with the same amount of Black. It is hard to tell at birth how dark the puppy will be once grown. Some puppies do appear darker but surprisingly in the end they may not end up much darker than their lightner littermates. Full Coat BT or LT is usually hard to identify until puppies are 6-12 weeks. Full coats tend to grow with their color rather than grow out of it. Some people do not realize how much color their BT or LT pup will loose throughout the first 2 years. All red puppies are born with a stripe of darker guard hairs down their back some darker than others this black stripe tends to fade before 6 months of age. All BT puppies have a full saddle at birth , you do not see split saddles or grizzled saddles on newborns. Even if a BT puppy grows and has barely a trace of their saddle left they are still considered a BT not a red. As you can see below It is very easy to identify Red vs BT. 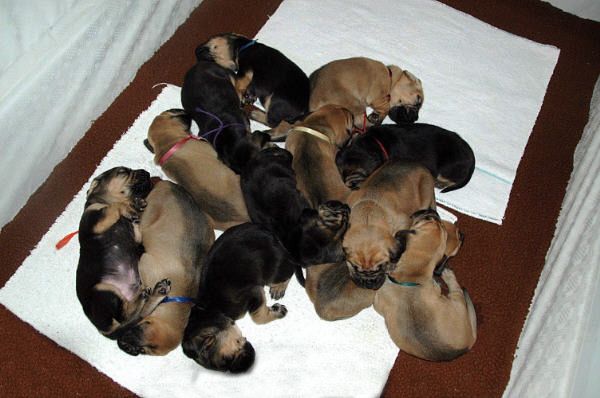 BT+BT= will produce all BT puppies (amount of saddle is dependant on Parents and lineage
BT(carrying LT gene) + BT (carrying LT gene)= BT + LT puppies only when both parents are carriers for LT
LT + BT (non LT carrier)= all BT puppies
LT+LT = all LT puppies never BT even if both LT have BT parents
Red is only produced if one of the parents is a red
R + BT= Red and BT puppies providing the Red had a BT parent
R(LT carrier) + BT(LT carrier)= can potentially produce all colors of puppies R,BT,LT and liver nosed reds
Reds who are born of 2 red parents and are Homozygous Reds will go on to only producing reds regardless of what they are bred to.

Since there are SO many other important factors to consider before breeding , Color should be at the bottom of any responsible breeders list of priorities